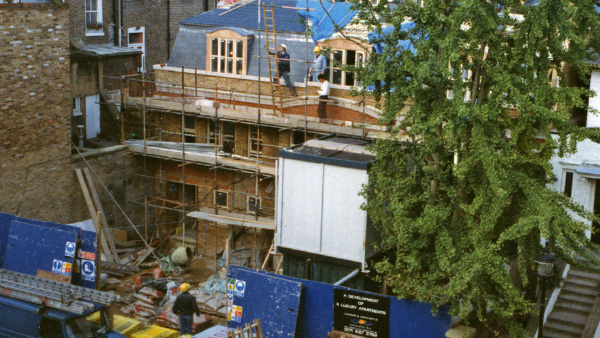 The redevelopment of the new Mansergh was funded by using part of the site for apartments. The main facade resembles the old building and the entrance to the Scout hall is on the left, just as it was before. New gates replaced the old original made at Larkin's Forge in Chesham but in the same style.

A time capsule is sunk just outside the entrance in block paving emulating the Group Necker. Through the entrance past the office the original window from the old club adorns the lobby complete with it's motto As Dogged As Does It. On the ground floor into the hall a balcony links all round with plenty of cupboard space one which retains the back wall of the original plunge pool. A new 'Cabin' leader room for Group and District meetings plus archiving all our history and displaying current Awards boards.

The hall now on a lower level goes across the site with side rooms and store, one of which opens out to reveal the Sanctum. The Servery has a side entrance through to the lower lobby, toilets and camp store.

Historical plaques adorn the stair well and the clock from the old club, still on old time.