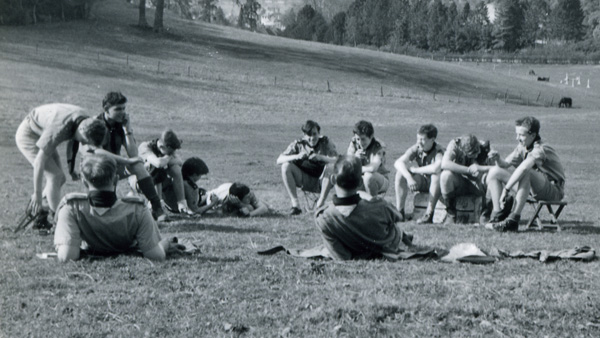 For many years the Senior Scouts, Rover Scouts and Leaders would traditionally go to Easter Camp.

Glory Farm near Dorking was a favourite site though far from ideal as it was in a field with quite a gradient and occasionally would find in the morning all occupants in a tent had slid down to the lower door, sometimes hanging out under the brailings! It was situated on a hillside opposite Deepdene House on the other side of the valley often shared with grazing cattle, that would trip over the Guy ropes sometimes unexpectedly and scare us city kids.

The trek cart was collected from the Railway Station at Dorking with the rest of the camping Equipment. The cart was assembled on the platform and loaded up to be pulled with varying degrees of success through the streets to the Camp Site.

It was the first camp of the year at and due to the then climate, in those days, it was not uncommon to awake to snow. Collecting wood for the fire was not always welcomed in such circumstances but very necessary.

This usually meant that water supplies were frozen. These were collected by one or two scouts humping large oval dixies across the fields to a cattle trough. Clean water was collected by depressing the ball cock which otherwise filled the trough.

Night ops were always good fun and it was particularly refreshing to hold a short Service in the open air on a Sunday.

After the change in the sections in 1967 Venture Scouts often camped at Chalfont St Giles or at Cookham, ariel runways and canoeing featured heavily on the activities.