I cast my mind back to 1964, a Friday evening on the eve of Whitsun Bank Holiday. In the space of forty minutes a chain of scouts had dragged all the camp kit and tents from the plunge pool store and loaded it into a butchers lorry, the transport supplied on loan thanks to John Lomax (one of our leaders and local butchers). 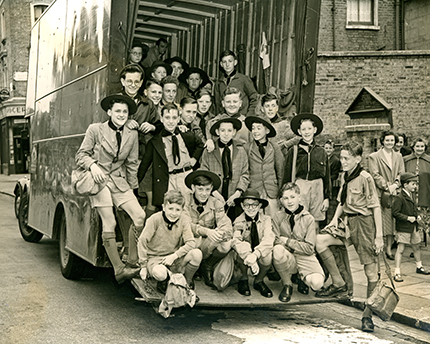 Eager and excited scouts climbed in and sat amongst the kit, with the side doors pinned back it set off down the A40 to camp. The whole scout troop went, plus Scout Masters (as they were known then), Senior Scouts, Rover Scouts and sometimes the older cubs joined the camp on the Saturday. It was rare for anyone not to miss this one!

The lorry bounced down the lane into the tiny hamlet of Hedgerley Green, the sides of the lorry brushed back the trees as it turned slowly round by the mill pond where the willows draped and pulled up by a gate next to a rather posh house. The field we were camping in belonged to Actress Nyree Dawn Porter and she had given her permission for us to camp in one of her fields next to her house.

This had to be one of the prettiest places in Bucks, close to London, and we are extremely fortunate to be here.

As soon as the lorry stopped a couple of the older lads jumped out the back and rushed into the field to check on the height of the grass and claim their normal Patrol spot. The tailgate dropped and gear was passed off at an alarming rate, carried into the field, including the big wooden coffin used as a safe food store. We knew the competition had started and within half an hour tents appeared all over the field, scouts out of uniform into 'camp kit' and off in search of wood and logs for the fire.

I returned some 30 years later and stood at the gate and imagined the scouts all set up in their kitchens complete with altar fires and gadgets, I imagine the smell of fires burning and the sounds from a camp fire. The site is as beautiful as ever, lawns immaculate outside the house, the field is still there, but at a price - new houses creep in across the green, stables built close to 'our gate' and the quiet air replaced by the drone of the M40 which is just a quarter of a mile away.

The track turns into a path leading on down to the church and the main village where we used to play our infamous Night Op (a wide game played in the dark without torches which often involved spooking out the new scouts through the graveyard or bombarding them with flour bombs). The two pubs in the village look absolutely stunning but I have never been in either, too young then!

All the activities were devised by the Leaders, treasure hunts, camp fire, wide games, day hikes. The house let us use their private swimming pool, often a pleasant relief from the hot day and smokey fires. On the Monday the parents and friends would come and visit, making it a group event, all bringing picnics and enjoying camp tea made with loose tea in a Dixie with fresh milk from the farm. So much fun at these camps, no facilities at all, just a field, we even had to collect our water in a Victorian water butt on a wheeled barrow and dig our latrines.

We left nothing and only our thanks. The journey back in the lorry was a hoot, everyone singing camp fire songs and yells, fascinated by LJK's awful driving as he followed behind in his little green Mini. Bless him.