Parents Night & the 'Going up' Ceremony

Twice a year the Group held a Parents Night. This is now called an Open Evening. The hall was lined with 2 rows of chairs along each side and was packed with parents and friends of the Group. On the stage the Group Scout Master with Special Guests would sit behind a large table covered with a hand made table cloth depicting the Group scarf. The evening would start with displays by each section, often showing things from a typical weekly meeting.

After the demonstrations by the various sections capabilities it was the time for one of the most important times in the Scouting life of a Wolf Cub, going into the Troop. The Going up Ceremony was the transition between Cubs and Scouts.

In Diehardia this was the only ceremony witnessed by parents as it was held during Parents evening. The Wolf cubs formed a circle, the troop in Patrol order, Senior Scouts in line and Rover Scouts, if any were in attendance, also lined up.

The Ceremony was started with a 'Grand Howl' from the cubs. After a few words of explanation by Akela who would wish them well in the Troop, all the Cub Leaders shook hands (the Scout handshake is with the left hand), the cubs who were going into the troop were presented to the Scout Leaders and in turn their respective Patrol Leaders. The ceremony finished with the Group 'Yell'. 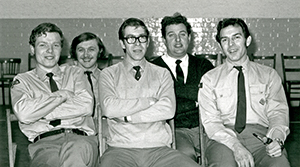 As far as the cubs were concerned, apart from feeling more 'grown up' they then had the privilege of addressing the Scout Leaders by their first names. This honour was greatly appreciated by all concerned, both cubs and scouters from top to bottom, including Les Kirby. Until this day all scouters are addressed this way. What a day for an 11 year old!

After the Going Up Ceremony and some refreshments all the Group sat down in the Hall for main awards given by each section culminating in some special award for the Cubs and Scouts and any special awards presented to the Leaders or parents in recognition of their long service. The picture at the top shows Rose Barrett receiving her Medal of Merit from the District Commissioner Len Clark.

These traditions are continued today. The Wolf Trophy (still the same wooden one from the old Cub Pack) is for the outstanding Cub of the Year and The Les Kirby Trophy (Boy Scout with stave bronze) for the outstanding Scout of the Year. This award was previously known as the Dick James Trophy but the original trophy was damaged and lost, the current statue is the one that was presented to Les Kirby so it is an honour to have this in use today. All new recipients have their names on the new glass awards boards proudly displayed in the Leaders Room known as the Cabin.