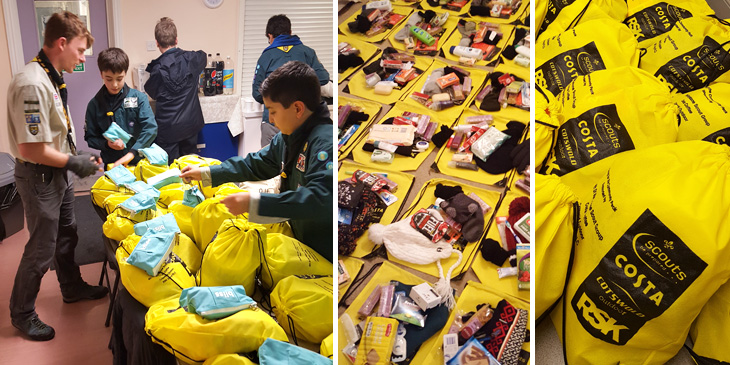 During the run up to Xmas the Scouts in Diehardia kept up it's tradition of thinking of others who are less fortunate than ourselves at this time of the year. This time they supported the 'Homeless' with a very useful pack of 'goodies'. The scouts used the 'Community Impact badge 2' as an incentive and basis for their efforts to do a 'Good Turn'.

The Badge requirement: the scouts had to address an issue which they felt that they could take action on 'to make a positive difference in the community'. The Diehard scouts chose Homelessness in Marylebone. After a night of discussion, we decided that we wanted to make homeless care packages that we could give to a shelter so that they could distribute them to the rough sleepers that needed them most.

This was well planned in advance and orchestrated by our leader Tyla Mace. For six months the scouts took action by collecting and donating items that would be used to make up the care packages. Scout leader Chris Larkin worked on obtaining some sponsorship to make it extra special. We were delighted with the response - 40 space blankets donated by Cotswolds Outdoors, 100 flapjacks from Costa Coffee (all for free!) but also RSK Group fully subsidised the cost of creating the personalised bags that all the items would go into. We designed the bags ourselves and used the Diehards colours so that they stood out.

After a long evening of sorting all the items that the scouts collectively brought in, the scouts set about making up 30 bespoke bags. Once completed, one Tuesday evening the Scout Troop spent the night at the homeless shelter 'The Marylebone Project', learning about what they do and helping them organise their donations. We handed them the care packages, all with the hope that at least it would make a short-term difference to those that really need it.

In the future, we hope to continue our work in the community by making more Care Packages or potentially volunteering in a soup kitchen. Not only did the scouts earn a badge but gained experience in living up to their Promise and Law by thinking of others. We are really most grateful to the assistance from Cotswold Outdoors, Costa Coffee and RSK Group for their support in this venture.