History and Background of the Sanctum

When LJK originally set aside this room in 1946 it was initially intended to be a memorial for the Diehards who sadly fell during the 2nd World War. Later the memorial was extended to include founder members who subsequently passed on. More recently, it has also included other long serving Diehardians that have devoted so much of their free time for the benefit of the Group. The Annual Rededication Service was held to remember them.

It is also home for the Group Colours, a special place for Scouts Own services and where every member makes and reaffirms their promise. 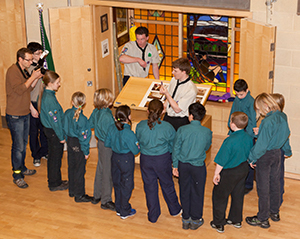 Today all new members make their promise in front of all the past Diehardians. Once a Diehard always a Diehard.

The pictures too have special significance. One is of The Pathfinder Scout and the other of the Cromwell painting on board his submarine fighting when all the crew had died. He was barely 16 and it from this that the Cromwell Scout Award is made for young people exhibiting special bravery.

The unique stained glass window is in memory of Mary Prior, it depicts a Diehard Scout looking over Lake Windermere. It was designed by Old Scout Les Lawrence (lollo) and made by Old Scout Albert Wagstaff.

At the time of the re-opening of the Mansergh all registered Old Scouts are listed and also another of those who had Gone Home.View the full Roll of Honour [PDF]