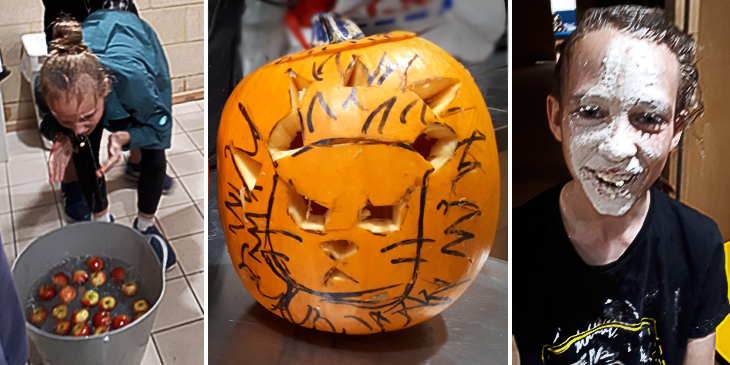 For Halloween this year we thought we would incorporate some classic Halloween games of donuts on a string and apple bobbing with everyone's favourite murder mystery board game bought to life…Cluedo!

The scouts were given a back story for a murder victim and were asked to solve the mystery in pairs. They had to figure out who the murder was, with what weapon, and where the murder took place by process of elimination. The first pair to correctly guess all three answers would win. There were 12 characters cards, 10 location cards and 10 weapon cards hidden that the scouts needed to find.

Some cards were hidden around the scout hut, others had to be earned by playing the games of jumping to get a donut off the string in 30 seconds and/or apple bobbing in 30 seconds. A bonus card could also be won if after apple bobbing you could find a small square of chocolate in a bowl of flour with your mouth (a challenge many of the scouts took on and found rather entertaining!)

Playing cards were also included to make the game more exciting. There were 8 playing cards and they could be used to sabotage other players by seeing their cards to aid your investigation, or by forming an alliance with another pair so that you could both have an advantage.

After about an hour or so we had our first guess and it was correct! It was Miss Gold, in the ballroom with an axe - classic! Once all the scouts settled down, we split them up into their normal patrols and told them they had 15 minutes to carve the pumpkin to represent their respective patrols - wolves, peckers and lions.

The evening was filled with energy, shouts and giggles, and excitement - I would say this would be due to the Halloween special evening, but most Tuesday nights at the Mansergh are like that!

Something that Old Scouts will remember - Les Kirby laying on one of his murder mystery nights. A classic would be - a patrol goes into the Cabin to find a man slumped across the desk and have to work out series of events. Another would be to look at all the items found on a murdered victim and try to identify as much as they can about him.