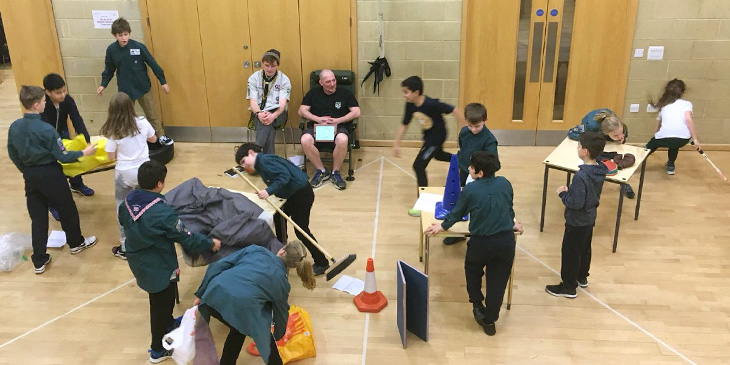 The Leaders decided to recreate their favourite TV show for an unusual brain testing scout night. Task Master is a show where celebrities are filmed doing intuitive based tasks with very simple instructions, the winner is the one who best fulfils the task.

The Scouts had no idea what was going to happen and for each task a very short brief instruction was given. It was against the clock to get the task completed and after each round points were awarded for the success and the methods employed. You just have to watch the programme to appreciate how it is run and quite a spin on the normal 'bases' challenges we often do.

These tasks include 'open a jam jar covered in Vaseline, quickest wins', 'think of a number, the lowest number not picked by another person wins', 'build the sturdiest water bowl holder', 'propel a piece of paper the farthest'.

It was a great night as it was a chance to allow the young people (in their patrols) to complete tasks with little limitations. They could use anything in the Scout Hall that they could gain access to and if there was a short hand way of completing the task it was rewarded. Some really ingenious methods were deployed and some quick thinking especially when other methods fail.

The Buffalos succeeded in winning Task Master. The Leaders were even rewarded by having out Tweet liked by one of the presenters of the show Little Alex Horne! A huge Thanks to Chris for organising this evening and Larner and Vanessa for helping set up the tasks.