EXPOLIT - 69 (a County adventure weekend and camping competition) was the new look in County Competitions, back in 1969, planned by the Scouters at the 'working face'. We want to take you back in time to experience this Scout camping competition that was designed to:

John Larkin talks to Philip Lomax, who had the pleasure of leading a winning patrol in 1969. John [JL] asked him what it was like as a competitor.

JL. How was the Patrol put together for the event?
The Buffaloes were a working patrol. The troop had operated for some time with 4 patrols but expand to cope with growing numbers, starting a 5th patrol. I was appointed P/ L and we had the opportunity to name the patrol. Although a young patrol, the scouters trained us and developed our team work particularly focussed on the camping competition that had been announce by the County.

JL. Did you do any special training for it?
We could not have been better prepared. Apart from our regular troop meetings the patrol met at each other's homes. Some of our parents and scouters coached us in camp craft and catering. We practiced our cooking and did time trials pitching and striking our ridge tent, to the extent every peg guy rope and seam were in perfect alignment.

JL. Who decided on the menu?
The whole patrol were involved in planning the weekend menu, but were guided by one of our mums! Everything was planned in detail, ensuring a balanced diet, ease of preparation and of course our likes. Menus were typed, storage jars labelled and we were armed with lists.

Sunday lunch was to be a test meal and we were given the details of this in the joining instructions for the camp. It meant we could practice this too though, so I ate lots of roast chicken before the completion.

JL. What was it like to arrive and check in at the start? Did you have to submit anything to the judges?
We could make our way to the camp by any means so were taken with all our gear and provisions by one of the scouters and a parent in their cars.

On arrival we had to report to the 'Storm Hut' at Gilwell Park between 19.30 and 20.00. We had to present ourselves in full and correct uniform, with only the equipment 'normally' used on a weekend camp. Any gadgets required were to be made on site from the materials available there. We were surprised that 'stoves' were allowed for cooking meals, other than the Sunday roast. We followed tradition and built a fire to cook all our meals.

Our 'drivers' departed once we had checked in and we were on our own!

We were soon busy pitching our tent and setting up camp, there was no time to waste. This is what we had trained for, as a team!

It was quite daunting, being there at Gilwell Park, the heart of Scouting, for the first time. It seemed such a large campus of huts, offices, training facilities, adventure trails and discrete campsites, separated from each other throughout the wooded campsite, including a fully equipped hospital, The Barnacle, which I was later to discover!

JL. What was the competition comprised of and how was it judged?
21.00 Friday and I had to leave to attend the PL's briefing. This was the first official meeting with other scouts taking part. It became clear I was there as one of the 19 Patrol Leaders represented the best scout troops in London.

The competition programme was very tight and time keeping was rigorously assessed. Camp craft, managing our tent, kit and camp kitchen, meals and such, had to be a polished routine, as we could be inspected at any time. But more importantly, we had to be competent, in camp living, so we could turn out as a Patrol promptly at each and every scheduled activity.

The programme was made up of familiar camp activities like kit inspection, Tug of war, Orienteering, Campfire , Scouts Own, along with a series of Adventure Trails planned to test our scout training, initiative and adventure all of which were assessed. These included:

JL. I understand you had an issue during the event, can you describe what happened?
There were a couple of things I recall.

We had gone all out on building our camp kitchen and constructed every camp gadget imaginable, alter fire, wash stand, perimeter fencing and even a 'self-closing' gate. Settling for the night we were disturbed by noise from outside and thought we were being raided by another patrol. Emerging from our tent, in torch light we could see the judges in our kitchen. Word of our pioneering had got around. The noise was the judges trying out our gate!

Saturday supper was underway and we were preparing sausage, mash and peas. The alter fire caught light and started to collapse. I grabbed the Dixie full of boiling spuds to rescue supper. I got scalded and ended up spending the night in The Barnacle. This really showed the leadership and worth of the whole patrol. I had a stream of visits, keeping me briefed and from the hospital bed we discussed strategies for tackling the evening activities. In the morning after breakfast I was reunited with the lads and it was business as usual.

JL. How was the Patrol spirit?
With the passage of time I can appreciate even more just what an amazing patrol I had the good fortune to lead.

I was privileged to be PL but each member of the patrol contributed equally to our achievement. Throughout, we worked together, supporting each other, discussing and agreeing our approach to each challenge. All demonstrated the spirit, skills and competencies that underpin good scouting.

The incident with me ending up in the Barnacle just showed how leadership is distributed. Each patrol member, regardless of experience contributed fully and shared responsibility in tackling the challenges presented. Although I was remote there was no loss of leadership.

JL. What parts did you find particularly challenging?
Reflecting on the programme and range of activities over the weekend most things were inherently challenging. Some things were more physically or intellectually demanding and some required higher levels of skill but in tackling these each patrol members individual skills and talents came into play.

We were determined to do our best and not to let our fellow 8th Scouts down, so I believe the biggest challenge came from within.

I remember the patrol discussion after the PL's briefing when there was a feeling it was 'unfair' to be assessed on rifle shooting which was not a sport any of us did. We concluded, boosting our moral, we would be achieving high marks in all areas of our key scouting skills. And that we did.

JL. Did you have any idea how well you were doing during the event?
I don't think we really had much idea of how well we were doing. While we couldn't have been better prepared, it was hard to know just how good the other patrols were at the basics of camping and Scoutcraft, especially as we couldn't observe the competitors. Each patrol had its own camp area, remote from each other, unlike our troop camps and New Zealand Flag were we all camped around a field.

We kept rigidly to schedule, reporting to each activity together as a patrol. We could sense some patrols beginning to let things slip, over time. If anything we worked closer as time progressed, conscious we were being assessed all the time.

Late Sunday we struck camp with the precision and skill we had been trained in. We were hopeful, but still not sure how well we had done. Then at 17.30 on Sunday in full uniform we gathered for the Scouts Own which was followed by announcement of the results and the presentation ceremony.

I don't think I had ever seen such a big silver cup, The Lukis Trophy, which we proudly carried back to the Mansergh.

JL. Thanks Phil!
John concludes: Such a tough event and so proud of the standards in the Troop that we won it five times in a row, coming 2nd on the sixth year and then again winning it a few years later. The leaders had a policy of making the previous APL the PL for the following year and retaining as many of the original Patrol as possible, thus keeping a flow of highly trained and motivated individuals. [JL] November 2021 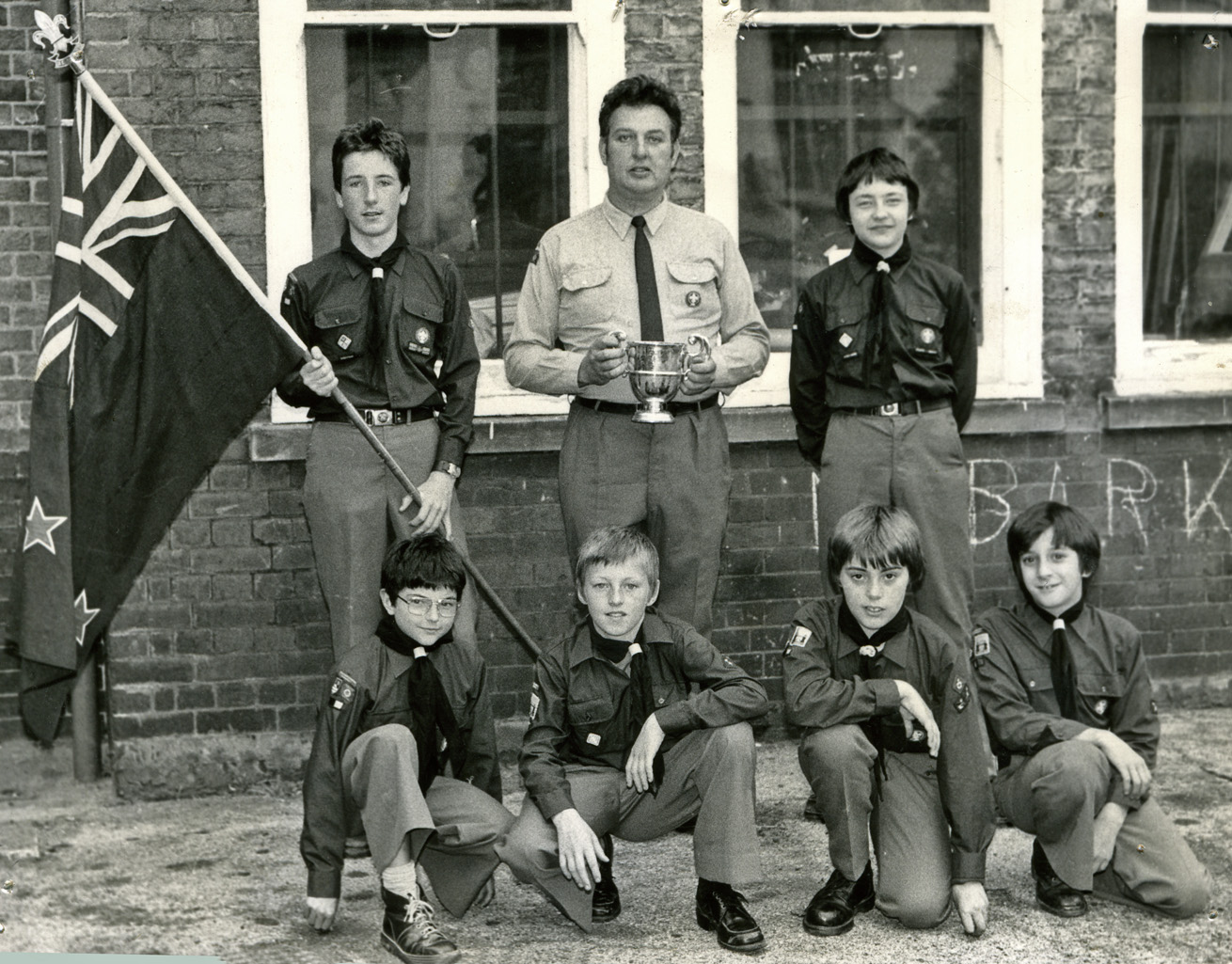 This account of the Lukis Exploit Competition prompted George McSweeney to add some rich colour to these recollections of the event!

I echo too Phil Lomax's recount of the Lukis event - but numbers had dwindled in the Troop and the attending 'Patrol' was contrived by Fred. We also smuggled in pre-prepared chicken sauce, put frog spawn in competitors water containers and planted dirty Billys in their nests, we raided their wood piles and lobbed countless eggs through the night sky into rivals skilfully erected compounds. And we suffered the same in return. Formative years indeed.