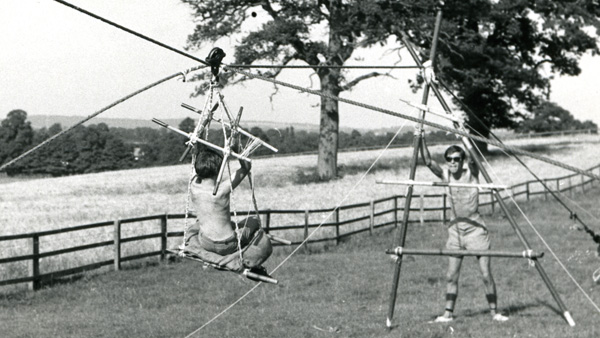 John Sherry recalls Summer Camps during the 1960's and 1970's were held for special reasons.

The main reason to give the scouts the opportunity to put into practice those skills they were taught in the troop room. Other reasons were to give the boys a good holiday at a reasonable price, no such thing as a package holiday to the sunshine of Spain, to teach them to be independent of their parents and to be able to integrate with the rest of their respective patrols. Above all they had to enjoy themselves.

My first experience of a summer camp started in the early Spring. A day out with Les Kirby and John Lomax to source a camp site. Les, being armed with an Ordnance Survey map, which he held against the windscreen, behind the steering wheel. As a first time passenger in Les's car this was an experience to behold. However, the site was found, the farmer agreed to host our camp and we returned back to St John's Wood, still on one piece although our nerves were somewhat shaken and stirred.

The camp itself was in Arundel, very wet and, at times, cause for concern. My car was stranded on the track leading to the field from the main road. However, with the help of the Senior Scours and some rope and block and tackle, the car was rescued. At the end of 2 weeks, the boys returned home with the main objects of camping completed.

The following year I was in charge of the camp held on this occasion at Hungerford. As always the main aims were to be observed, but there was always something a little different. At this camp we had the pleasure of seeing Concorde almost daily during her early test flights, what a sight.

During my early camps the late Len Pickford was the quarter-master and what a grand job he did in controlling the food rations to the patrols. During one camp he collected steam from one of our first time campers to make a steam pudding the following day. This young lad spent a great deal of time boiling water, collecting the steam between 2 mugs and running across the camp to Len. The following morning he approached Len to the collect the steam, only to be told, he had left the lid off the dixie and all the steam had been lost!

Each camp we went to was the same format but with some outstanding situations.

The mini bus tour to the Isle of Man where one bus broke down and had to be left in Meridian, just outside Birmingham. The remaining 3 buses proceeded to Liverpool to catch the ferry to the Isle of Man. It was left to John Larkin who had just passed his driving test to take the bus on the ferry, off the other side and drive to the camp site. John Sherry and Fred Judson spent the night in the Liverpool Police Station talking scouting with the duty officer and had some sleep in one of the cells. The following day a train journey to Meridian to rescue the bus and return to Liverpool and the Isle of Man to rejoin the troop.

At the camps I attended it was a pleasure to see, in no particular order, Bob Larkin handing out the pocket money and assisting with the stores. Alan Meaden digging a 7' 8" Latrine pit for the use of the campers. Fred Judson building the most amazing Altar fire to help with the Scouters' meals. The Senior scouts scouring the Isle of Man for a flag pole. John Larkin building his Arial runways as well as playing his guitar at some outstanding camp fires.

Another notable holiday was held in Switzerland, a change from camping as, on this occasion, we rented accommodation in a Swiss Chalet. As with all holidays this had its moments. Some of the Group on the wrong part of the train at Basel. At 4.00am we were transferring boys from one train to another. On another day we were remonstrated by a local resident for singing some camp fire songs on the station platform. The Swiss did like their peace and quiet when travelling.