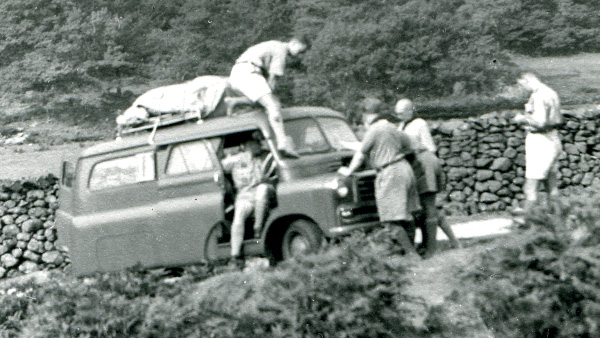 The European Dormobile Trip in 1956

This was a great undertaking which saw us travel through France, Switzerland Italy. Driving up the Simplon Pass was interrupted with the occasional Get out and push lads - an experience on it's own ! Our drivers were Roy Scales, Bill Lee, Brian Burrell. Keith Youngs. The journey across the marsh land approaches, interrupted with gas flares burning off fuel was memorable as we approached our final destination of Venice.

Sleeping on the floor on straw paillasses in a Monastery was also a new experience. Naturally visiting the many famous sites and the Lido was yet something else again not to mention bargaining with the Gondoliers and other Italian tradesmen as well as exploring the main canals, shock horror in motorised Boats, walking the back streets, and visiting the Murano Glass blowers in their workshops by the side of the Grand Canal.

On way there we had a brief clash with an Italian motor cycle Cop who demanded to see our passports as he didn't like us blocking a roundabout on the Bank Holiday. These were packed in the luggage on the roof, but fortunately David Bailin had his handy and this sufficed. Needless to say traffic offences were an on the spot fine, it sounded a lot of Lire but was actually a small amount.

We went to collect our Dormobiles for the homeward journey, only to find our vehicles had been cordoned off by red and white barrier poles. A hasty exit was needed for as we moved the barriers to drive off the Italian Police turned up reaching for their pistols. Then it was onto the Alps again and eventually home.

Yet another adventure abroad saw the Group visit Oslo. The Winter Olympics in 1952 had seen Norway became the first Scandinavian country to host a Winter Olympics, and were the first to be held in a nation's capital. We benefitted from this as the enormous Ski Jump at Holmenkollen had been improved continually for this event. Climbing up to the top of this and peering out from a small box at the top peering into thin air seemed totally suicidal to us non skiers since at this point you were supposed to leap into space.

We also met our Host Guide Runar Berg who was about our age and studying hard to become a Mining Engineer. It was also the start of a lifelong friendship between Phil Peeling and both families. Whilst the main party stayed for two or three nights at the Youth Hostel in Sandefjord, Phil Peeling and Keith Price stayed at The Berg's summer house on Oslo Fjord. Keith and Phil went by boat with Runar to collect the others to join us for the day including a very special meal prepared by Runar's Mum. Runar went to an Old Scouts' reunion a few years later and also took part in the Scottish Dormobile Trip.

We enjoyed hiking through small villages with their small bakeries enticing us in with fresh smells of newly cooked cakes - well for at least some of us! Then catching up with the others it was over the mountains with the clean fresh air and sudden lakes being stumbled on gleaming like precious stones. For most of us it was the first time we had used a Youth Hostel abroad. We were surprised to find comfortable bunks and washing facilities that included hot water. Yes HOT water!

Back in Oslo it was a visit to Frogner Park and Vigeland Sculpture Park, which covers 80 acres and features 212 bronze and granite sculptures all designed by Gustav Vigeland. Notably 58 of the park's bronze sculptures reside along a bridge relating to the various circumstances of life from birth to death.

A short visit to Belgium saw us visit the old Flemish Town of Brugges. This enabled us to visit Ypres and the gleaning graves of the fallen from both World wars. The impression was considerable due to the fact that the graves and names stretched as far as the eye could see. Proceeding onto the Menin Gate to hear the Last Post that is sounded every night when the traffic is stopped. The Memorial lists the names of the Allied Soldiers that have no known graves chiseled into its sides. We felt humbled that so many that gave their lives that we should enjoy such freedom so soon after WW2. It was also a poignant reminder that Les Kirby was a WW1 soldier survivor.

On again through Charleroi to Namur and Dinnant in the heart of Walloon country and the Ardennes. This involved crossing the bridges at both towns to cross the River Meuse. A pause for lunch and another experience un-encountered by most of us before. At a small restaurant the owner pointed to glass fish tank with trout and other local fishes in it. Vich one you want? he asked.

Then it was onto Luxembourg with everyone wanting to see the famous Radio Station which we all listened to back home. Walking across the bridge over a large chasm that seemed to run through the centre of the city provided excellent sight-seeing. Little did any of us know that this old European Town was also a centre for much tax evasion.

Then onto Brussels where we met up with some Belgium Scouts who explained about their divided city. A visit to the Atomium structure built for Expo '58 and the World Fair was the next sight to be seen followed by the mandatory visit to the bronze statue of a little boy urinating at the top of a small fountain set into a wall aptly named Manneken Pis.