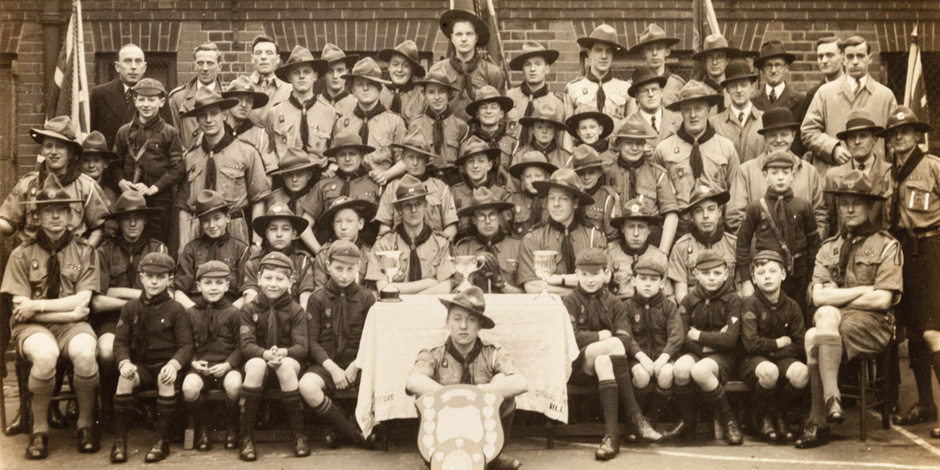 Official registration at Scout HQ, use of the soubriquet The Diehards granted from Middlesex Regiment. First edition of The Diehard magazine. Cub Pack, Scout Troop and Rover Crew formed.

It is perhaps not a surprise to learn, in view of the Clubs history and founders intentions, that Lisson Grove was in the late 19th Century one of the worst slums in London. Not so surprising is that later the boys used to meet up ready to go to meetings outside The Orphanage which previously stood where Wharncliffe was built and still referred to as such even after the Mansergh was opened.

The Bulls Patrol present a New Zealand Flag to the District which became the annual camping competition. Ten years later the Troop earns it's first hat-trick of consecutive wins in this competition.

Old Scout Constitution drawn up and forms the basis of the rules laid down by the BP Guild.

First Summer Camp held abroad in Denmark, WW2 breaks out and Scouts recalled to come home. Soon after the majority of the Cubs and Scouts were evacuated out of London. The Diehard becomes the main point of contact for everyone including twelve signed up in the forces.

Scouts become messengers for the Town Hall, others in ARP and AFS, four Rovers joined the Home Guard Air raids reduce group down to 6 scouts and 4 Cubs as more are evacuated. 47 Old Scouts and Rovers now serving in the forces.

Many were killed in the Second World War when a doodle bug fell on the blocks of flats in Wharncliffe Gardens. A little further up St John's Wood Road is Scott Ellis Gardens which also suffered some war damage but not as significantly as the former.

The two blocks of flats mentioned above provided a large number of boys who started in the Cubs at the Mansergh as well as leaders rejoining having just returned from the fighting in the War. It was the families from these two places in particular, together with the occupants of other large buildings that formed the core of the unique association of parents, people and supporters who became known as Diehardia and always at the centre of the community.

Sadly WWII took way members some of whom did not return but are always remembered.