In the year 1811 the 57th Foot was campaigning in the Peninsular war against Napoleon's armies. At a town called Albuhera the regiment, in the company of the Buffs, confronted an overwhelming enemy force and had to defend their position.

Colonel Englis, supported by 24 officers and 584 men, commanded the regiment. During the ensuing battle over fifty rounds penetrated the regimental standard. Colonel Englis rallied his men by passing through the lines urging his men to die hard.

The positions were held with great gallantry and loss of life, such that there remained only 1 officer and 168 men fit for duty. The regiment was subsequently renamed the Middlesex Regiment. The battle honour, Albuhera and the sobriquet, The Diehards were both added to their colours. 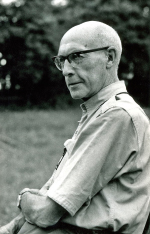 During the middle of the First World War, 1914 - 1918, a young scout called Leslie Kirby was conscripted into the army as part of the general mobilisation. In due course he was drafted to serve in France and was with his regiment sent to the front as replacements in one of the big battles. On the way through the trenches to the front lines he saw the constant stream of casualties being helped to the rear, where upon he vowed that should he survive the conflict he would devote his life to the benefit of the youth of tomorrow.

Some weeks later he trod that same path in company of 29 comrades who were the remains of the original complement of over 300 officers and men, which formed the regiment.

On demobilization he rejoined the 5th St Marylebone, known as the Dandy Fifth as a Scout Leader. During 1920 there was a disagreement amongst the leaders of this group and Les left with the intention of forming his own group. This was met with scepticism by many who said that it would not last.

In 1921 he first wrote to the Middlesex regiment to obtain permission to use their sobriquet, and from then on and as long as the Group exists, the 8th St Marylebone will always be known as The Diehards.

Want to learn more about our history...?

Discover the well-documented history of The Mansergh Hall...